Yes, it’s my dad’s birthday today. I called him around noon but we couldn’t talk. I promised to call again in the evening. Just a short while later it’s now 11:30 pm and now would be the first moment I have to dial his number again. So instead of waking him up, here’s a little video. Bon anniversaire, Papa!

And yes, by now I definitely know that I am repeating myself but this WAVE is just incredible. Yesterday’s suspicion was confirmed in that the combination of a tight schedule and steep roads will consider a challenge even though distances to cover are moderate. 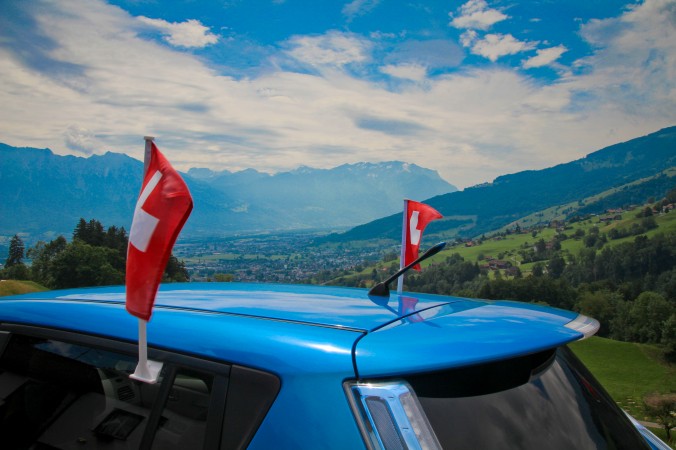 Today was another of those days where we need the roadbook in the evening to remind ourselves how many places we visited during the day. The first part until after lunch was a series of school presentations. 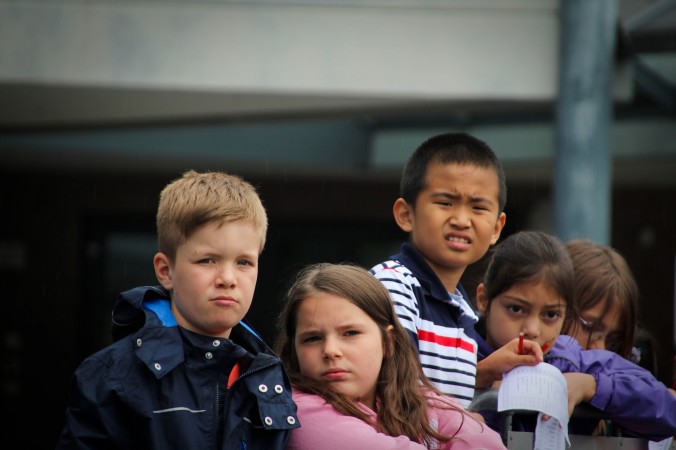 You’d think you get used to being welcomed like rock stars but we don’t. It’s amazing the amount of joy and enthousiasm those kids send over simply by standing on the side of the road and cheering and clapping. simply amazing

These shows are also for points – the kids judge our cars’ design and how we decorated them. You might have heard a mystery honk on my Sachsenring youtube video – we have an undisclosed device on board that we will present tomorrow, and we hope it helped gaining the kids’ sympathies. 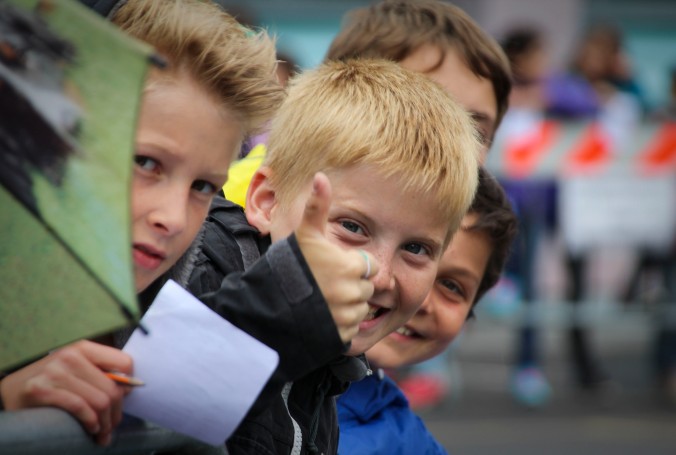 We’re really glad these events are part of the WAVE because they are truly inspiring.

Later on, after a quick charge stop at the local Supercharger/DC charger in Maienfeld where we “accidentally” bumped into about a dozen other teams queued up to charge, we went on to Landquart, where we gave pupils a ride to Küblis. Our next stop was then in Küblis itself, we had a nice get together at the local hydroelectric power plant and were treated with an extensive visit of the whole site. 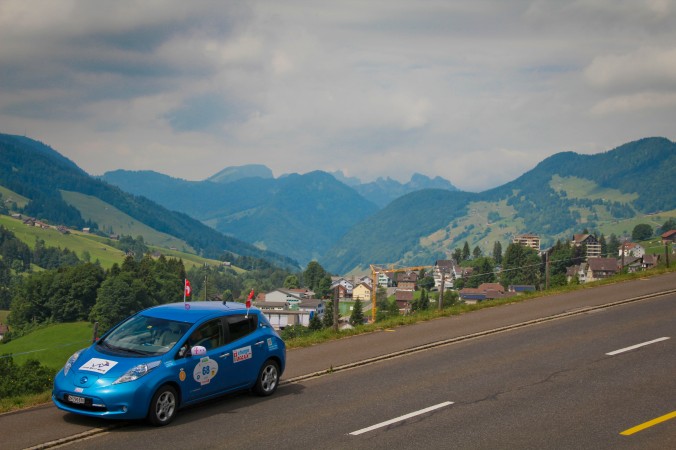 Our next stop would be Sankt Moritz – 35 kilometers away but also on the other side of the Flüela mountain pass – which meant going uphill a whopping 4500 ft. Since we were stuck with a slow charge, we were just sitting there in Küblis waiting for enough battery power to make it, when a call from Peter Schwan of Team GottliebD made it all much easier. Our support team had managed to set up the mobile fast charger in Davos, which meant we could recharge right before the final stretch of the mountain pass. That was incredibly helpful…. Thank you, Peter! 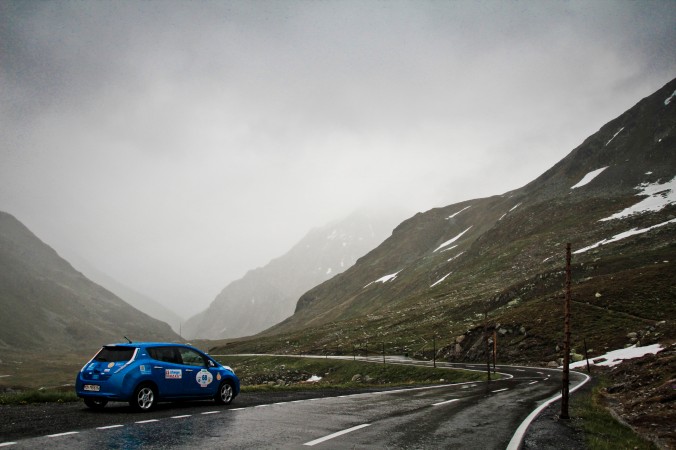 This allowed us a more comfortable drive without being a nuisance to traffic, and we even took the liberty of having a bit of fun – after all, you get your energy back on the way down. 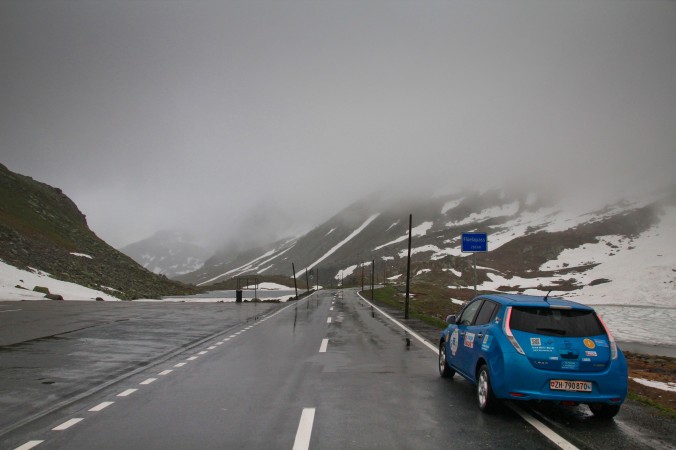 As you can see above, we made it without any problems and just stopped for a picture before we went on. Temperatures were around 4C up there in wet and grey weather so we had no reason whatsoever to stay and ran as quickly as we could.

After an incredble dinner buffet in La Punt, served by the most corteous people I’ve met recently (and yes, I’m serious here), we moved on to Zuoz where we will stay in a hotel for the night.

I should add that the villages around here are incredibly beautiful and visiting this area here in the summer can only be recommended. 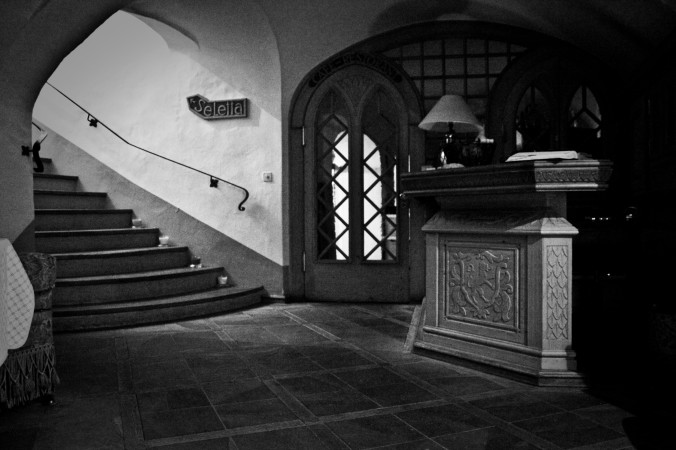 By now we are ready to crash again (we have been since about 2 pm to be honest) and look forward to tomorrow. If you think today was hard, what with the Flüela and all, well wait until you heard what we will go through tomorrow.

We will drive over the Stelvio Pass and the Bernina Pass. We are talking about a total of around 15,000 ft of elevation to climb! We thought the Berlin-Switzerland rush was a challenge but I think tomorrow will be similar.

a small tribute to Gjon Mili (google it)

Please note that I only use previously unpublished pictures in our blog. For pics and updates of our past and future adventures, I’ll have to refer you to our facebook page yet again.