As you know, Team Wattwurm has always been ambivalent; we like electric cars and bikes just as much as we like loud and fast (and sometimes slightly obnoxious) modes of transportation relying on fossile fuels. Yes, this might come as a shock to our new readers but sorry, we’re no tree huggers.

Now, while I have never been able to warm up to motorcycles, David has been an avid bike rider for years now. Some of you might be aware of the fact that electric motorcycles are slowly beginning to enter the market – even Harley Davidson has one in the making.

we’re not sure it’ll target the same audience though

Therefore, David had been closely monitoring the latest developments for a while and soon picked up that the Brammo Empulse was ready to hit the european market. He quickly managed to trace down the first bike to enter Switzerland – and arranged for a test drive.

which brought up fond memories

That is why, on a quiet and foggy saturday morning, I set off in our camera car (i.e. the Leaf) heading for Alpnach near Lucerne; David took a detour to clean his KTM since he wanted to have it evaluated as a possible trade-in. Total round trip distance was 136 km, right on the edge for the Leaf;  battery charge had to be managed. Usually, this means reduce cruising speed and, whenever possible, drag. In practice, this of course means tailgaiting a truck. 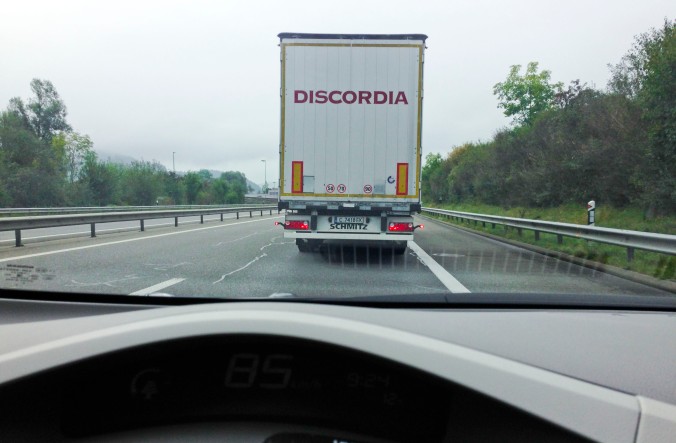 if you meant to pick a company name that conveys your people skills, you failed

Even though it was planned that David would catch up at some point, I actually arrived first at our destination – the Triumph shop in Alpnach. By the time David had arrived, I already had found a power outlet to charge the Leaf as long as we’d be there. 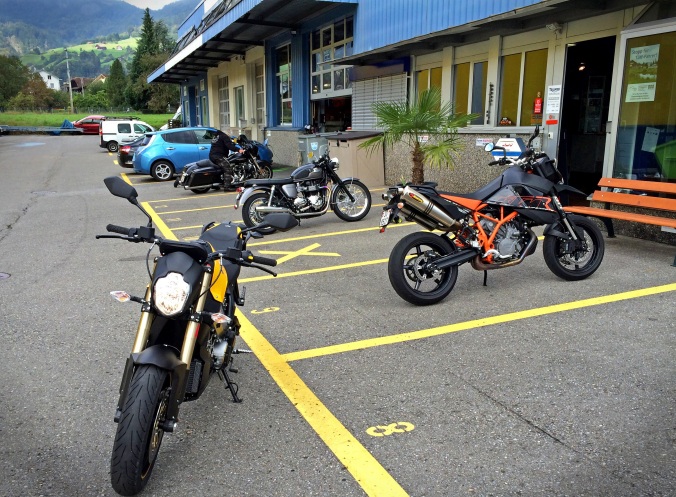 We found the Brammo waiting in the showroom, plugged in, charged and ready to go. We pulled it out and took a few basic parking lot shots to give you more of an idea.

At first glance, it looks really nice. The design is contemporary, and those silver frames on the battery packs make it look unusual – we like it. There’s not much to complain about, save for the rear wheel fixation which in our opinion is a proper eyesore. That really needs to be changed.

After being briefed properly by Carmen on how to operate the bike, we set off. Immediately, David started his trademark slalom sverve which he does every time he sits in or on a new vehicle – as demonstrated below.

From my perspective, the bike seemed to have decent power – but even I did notice that gear changing was time consuming, a thing David later complained about. Even though the IET drivetrain supposedly was – at least partially – developed in collaboration with Brammo, it does not seem to fit the bike – more importantly, the gearbox is sticky and reluctant. Following David, I could literally tell that every gear change would take two to three seconds.

minus the dancing, this is what it looked like

Also, We think that the gearbox eats up a lot of fun, the acceleration the Brammo offers really does not correspond to what we think it should be with that motor. For instance, while it looks like David is pulling away like you’re used to see it with motorcycles…

… it’s a different story once I try to keep up with the Leaf:

I did not have the opportunity to film it, but we did a similar experiment on our way home with David on his KTM 950 and believe me, I got dusted big time… No comparison to what you see above (even when taking into account that the KTM has much more power). So, considering the vastly different power to weight ratios between the Leaf and the Empulse, we dare say we’re not satisfied with its acceleration; we think that a two or three speed gearbox, designed specifically to fit the motor and drivetrain, would be an immense improvement. A quick fix would be to swap sprockets, because who needs a top speed of 177 kph anyway?

We had chosen the nearby Glaubenberg road to have both a proper scenery and some genuine fun. That said, we had agreed that David would stay within viewing distance to take more pictures, static and moving. 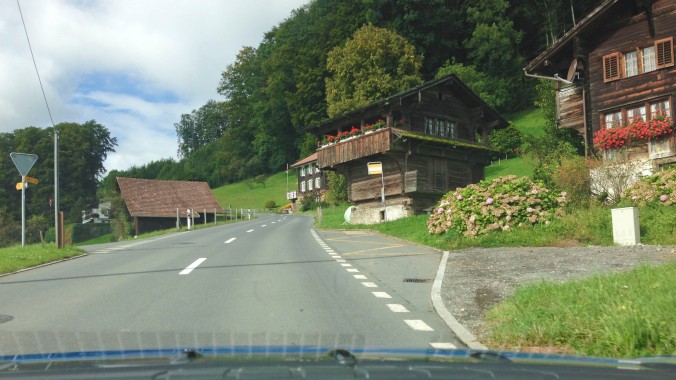 That idea however got lost as soon as there were more than two corners lined up. I did my best to keep up but he was gone almost instantly. Using that as an excuse, I flung the Leaf up that road as hard as I could… Once again, the Wattwurm Effect set in.

yes, it was one of those days…

I stopped somewhere along the way with a completely empty battery; it slowly dawned upon me that I might not make it to the top and decided to wait for David to come back down. In the meantime, I managed to capture the local soundtrack for you:

Another, slightly more rational reason to not go any further up was that we were looking for a nice scenery for pics and videos, but the clouds were low and the upper part of the Glaubenberg was at least 50 shades of grey. David eventually came back with a big grin on his face, mostly positive about the bike save for the gearbox issue… 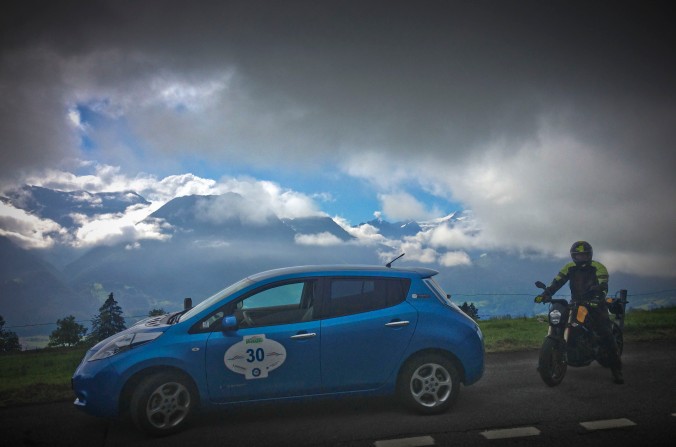 We decided to head back down (not that I had much of a choice anyway) and find a spot in the sun to shoot a few more pics. 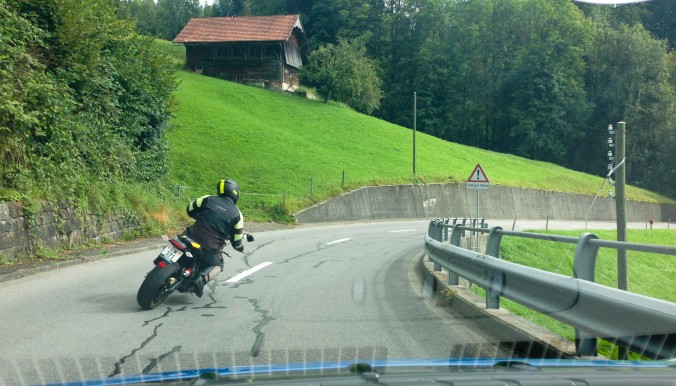 Eventually, we did make it out of the clouds again and found a nice and sunny spot to take another closer look at the Brammo.

We mostly could confirm our first impression; it has the appearance of a proper bike, if a bit massive due to that battery setup; but there’s nothing wrong with that. It’s good-looking and we think that particular color combination suits it well. in case you are wondering what it sounds like, here’s a drive-by, prominently featuring my index finger as supporting actor.

David reported great handling and agility, with excellent brakes. Throttle response is precise, but the transition between acceleration, soaring and regenerating could use some fine tuning. The seat is well shaped and offers good support during acceleration. It would seem that David is slightly too tall for the bike, since you have to flex your knees quite a bit and that might be an issue if you have, well, knee issues. 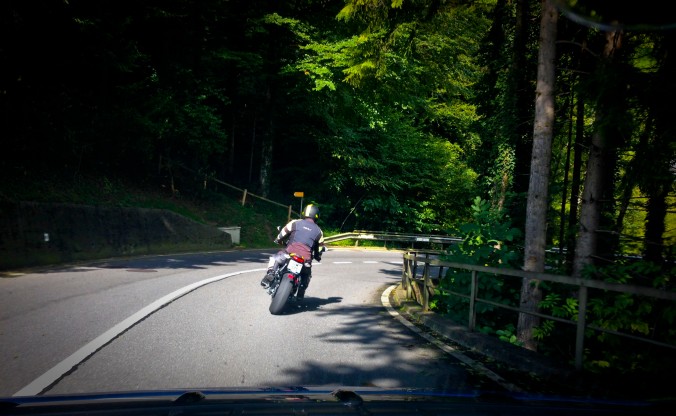 we continued our way down, enjoying the scenery. I really think we are priviledged to live in such a nice part of the world. but I digress… We shot tons of further pictures, which, sadly, basically all look the same (in case you hadn’t noticed yet). We did have an entertaining moment though when we managed to startle a friendly local, who, by the look on his face, was definitely kind of surprised to see an almost silent motorcycle fly by, followed by an almost silent car.

We returned just in time to have another chat with Carmen, discussing driving and handling. Also, we don’t want to deprive you of the technical details. A full charge takes about three hours, with a resulting range of about 150km, realistically. There is a Type 1 socket on top of what would be the fuel tank on an ICE bike, and the Brammo comes with a wall plug to Type 1 ICCB, more commonly known as a “charging brick” (here’s an example).

Now the Brammo was designed for the american market; there are over 7000 Type 1 charging stations available in the US – this means there’ll barely ever be any need for you to carry the ICCB along and you’ll most likely just use it to charge at home, so no argument here. However… Those of you who travel electrically will know that in Europe, we typically have Type 2, ChaDeMo and CSS plugs available on our chargers, but Type 1 is nowhere to be found. This means that you’ll have to carry your ICCB with you at all times – it’s the same for our Leaf. But in a car, you don’t really care, you just toss it in the trunk. On the bike, however, you’ll have to carry it in your backpack, and that charger is several pounds, not to mention the space it takes up. 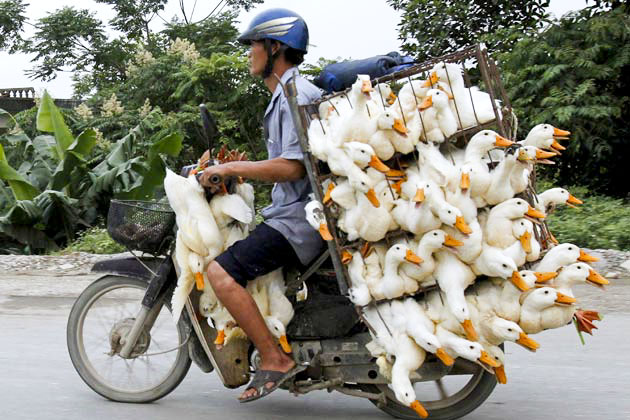 granted… it could be worse.

One could argue that the problem is partially solved by taking along a passenger to carry your backpack and therefore, by proxy, the ICCB, but that’s kind of besides the point. We think you could combine the slow charge unit with the 3kW rapid charger already installed in the bike frame, and reduce your needs to an extension cord. At the risk of being a bit mundane, you could even imagine a setup with a rolled up cord, like a vacuum cleaner.

I know what you’re thinking now; let’s not get carried away though

In any event, these are problems we currently face at the dawn of the electric age; hopefully, issues like that will be sorted out in a few years when more versatile charging points might be more common – and/or the plug type discussion has settled a bit. But back to the point… After our test drive, David concluded that the Brammo is a good start but still needs a few major improvements; he’ll stick to the KTM for now. But we’ll certainly come back to test drive the 2015 model.

The net result at this point was that we had an hour of great fun but I was stranded with an empty battery…. again…. And there were no fast charge stations available anywhere near. Well, what now? LEMnet to the rescue, we picked a restaurant within range that claimed to have a charge point. 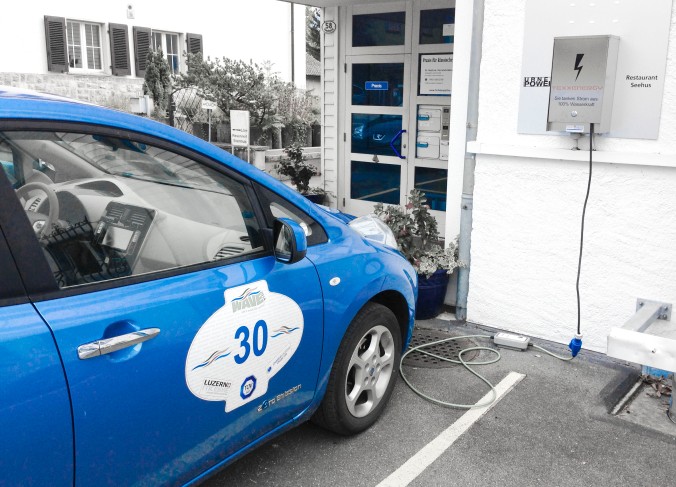 When we arrived, indeed, we found a wall box and plugged the Leaf in. At ten amps, we had all the time in the world to have lunch and coffee – slow charge definitely is one of the few major drawbacks we currently still face in the electric world. In any event, the food was great, and we also learned how to label restrooms the italian way. 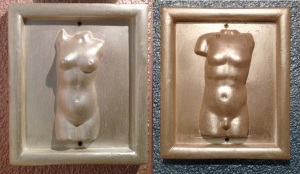 Michelangelo would be proud

I mentioned slow charge – as you’ve already guessed, even though we took our time, range still wasn’t enough to get home. I picked the Tesla Supercharger in Egerkingen (it also has a ChaDeMo charger available, and, as opposed to most other charging points, a restaurant and coffee shop nearby), entered it into the sat nav and we took off. Soon, a friendly lady who, apparently, lives inside the dash of our Nissan, pointed out that the charger might actually be a tad out of reach. Well, thanks to the fact that we live in an area where ChaDeMo chargers are quite common, another one was found in a jiff and I managed to get there without trouble and 10km still on the clock – no coffee, but I got to keep going in return. And so, after another bit of quick charging, I made it home.

Disclaimer: we use a camera support, a remote control and/or the assistance of a passenger to shoot pictures and videos out of a moving car, and we make sure the driver always has both hands on the wheel. We always follow speed limits and traffic laws. We do not take any chances , and neither should you.

Picture credits: the bear was photographed by Pat McKillen – for more great wildlife pictures see the full website; the bikers were featured in a Mirror article; Test Drive animated Gif found in the C64 Wikipedia; Charlie Chaplin was in a DVD review by Texas Public Radio; we found the goose ride in the DPC photo gallery, while the Moto-Crotte picture is featured on the hungarian Urbanista blog. Happy clicking!